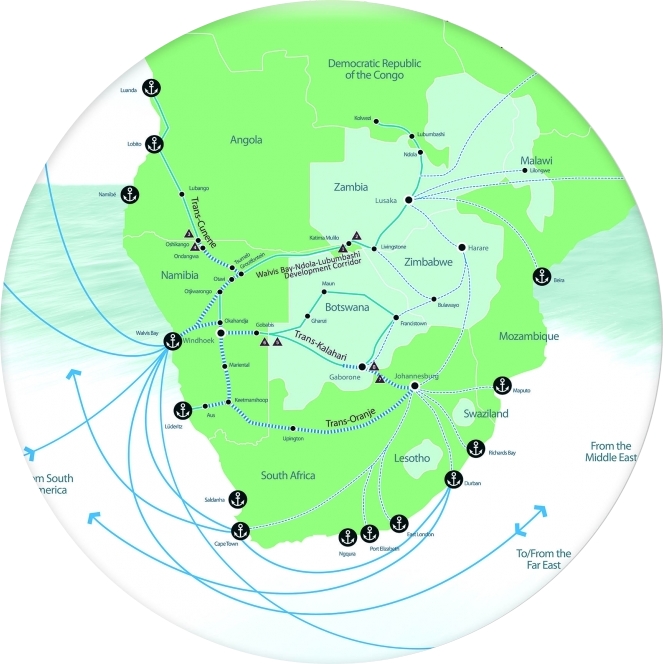 The Minister of Works and Transport, Hon. John Mutorwa visited the Walvis Bay Corridor Group (WBCG) Head Office in June, to better acquaint himself with the company’s activities.

Met by the Board of Directors, along with the Acting Chief Executive Officer, Mr. Clive Smith and his management team, Hon. Mutorwa was briefed on the configuration of WBCG and given an update on the company’s mandate and the various projects it manages. As part of his presentation, Mr. Smith highlighted WBCG’s endeavors to consolidate the activities of the Namibia transport sector towards the successful implementation of the Namibia logistics hub Project. “This is evident in our structure; our members fall within both public and private sectors and this unique PPP format allows for effective facilitation on matters of trade and infrastructure development”.

Recognizing the significant role that WBCG plays in managing the corridors and promoting Namibia as a gateway for cargo moving into and from the region, Hon. Mutorwa stated that Government stands behind WBCG’s quest to develop the country into a leading Logistics Hub in Southern Africa. “My visit here today reaffirms my Ministry’s support of WBCG’s activities,” Hon. Mutorwa noted.

The Walvis Bay Corridor Group engages the Government on matters relating to policies, regulations and infrastructure development whilst engagement with the private sector focuses on business development and supply chain solutions. Considered a corridor best practice, WBCG has been instrumental in enhancing regional and continental trade with a clear focus on positioning the Ports of Walvis Bay and Lüderitz as real alternative trade routes to and from landlocked SADC Countries. This is evident in that the efforts of the WBCG resulted in about 730,000 tonnes of transit cargo moving through the port of Walvis Bay in 2018, which equates to an increase of 48% compared to 2017. This translates into about N$ 2.6 Billion that the activities on the Corridors contributed to the Namibian Economy.

The meeting also touched on matters of Transport Legislation, Regional Corridor Cooperation, Industry Capacity Building programs and the Namibia National Single Window Project as well as WBCG’s role in the African Corridor Management Alliance (ACMA). The high-level exchanges between the Minister and the WBCG team enforced the resolve to further pursue and maintain opportunities for the mutual benefit of all stakeholders.

Upon conclusion of the meeting, Hon. Mutorwa cited the meeting as a vital process in contextualizing WBCG’s work. “It is important that we understand what is happening on our corridors and its impact on the country and the Region. This visit has greatly enlightened me on these processes and justifies the President’s slogan of holding hands and moving in one direction. It is thus my sincere wish for the WBCG to remain steadfast in pursuing their mandate and to enhance their contribution towards the Namibia House”.